I would like to pay especially close attention to Titian’s blues. He used different types of blue pigments, including ultramarine, that were, when priced by weight, more expensive than gold.

Titian applied ultramarine frugally, only for certain elements in the composition. He often did the underpainting in less expensive blue pigments.
He often underpainted blue draperies with pink or lilac hues; we will take a closer look at this.

Titian always used high quality ultramarine; however, the pigment was blanched in a few places, such as in the Virgin’s cloak in both The Holy Family and London’s Madonna (Aldobrandini Madonna). This discolouration reduced the contrast of the folds and made the draperies appear rather flat.

In The Flight into Egypt, azurite was used for the Virgin’s blue mantle. The stockings of the figure leading the ass were painted with a mix of indigo and lead white. For Joseph’s purple clothing, azurite was also used, mixed with red lake and white. 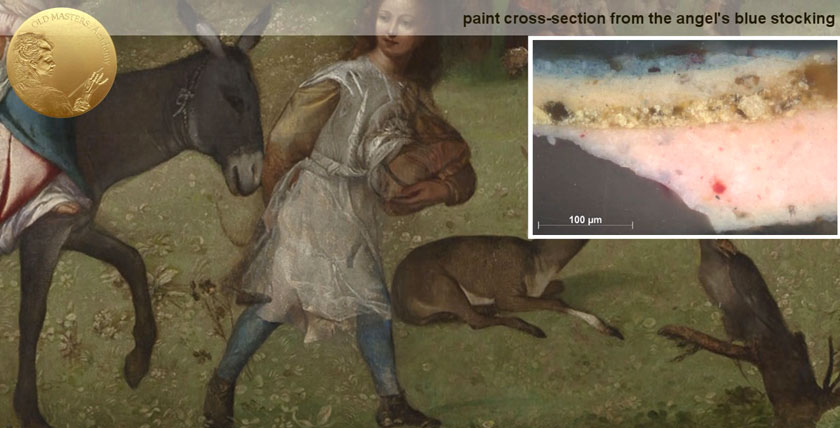 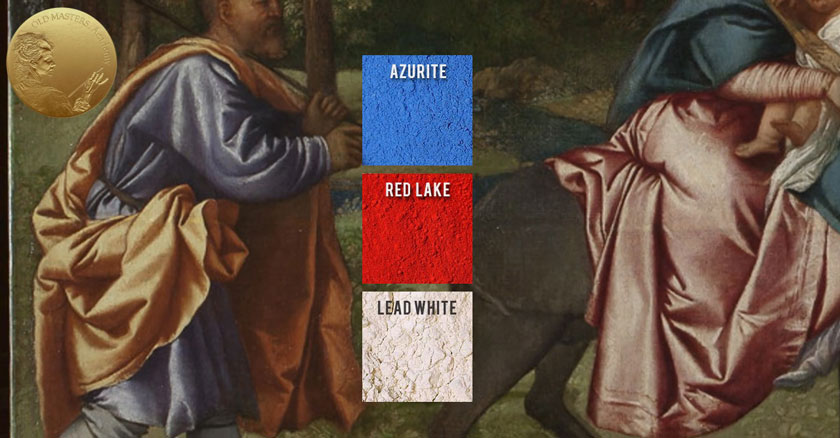 The build-up of this purple colour goes as follows: First, a rose pink underpaint (containing just red lake and white) was applied; the next layer consists of a purple paint mix of azurite, red lake, and white; and for the final layer, he applied a transparent glaze of ultramarine and red lake.

This was a widely-used and traditional formula for painting purple draperies for artists in Venice as well as Florence and Rome.

The same complex structure of layers was applied for Joseph’s dull, purple robe in The Holy Family with a Shepherd, but without any ultramarine, giving it a more plum-coloured purple.

Because it would be too expensive to use ultramarine for all the layers of the Virgin’s mantle, Titian underpainted it with a cheap blue indigo and a little bit of red lake to achieve a slightly purple tint.

In earlier Venetian paintings, for blue underpainting, artists often used azurite, which is a considerably cheaper then ultramarine, but more expensive than indigo. 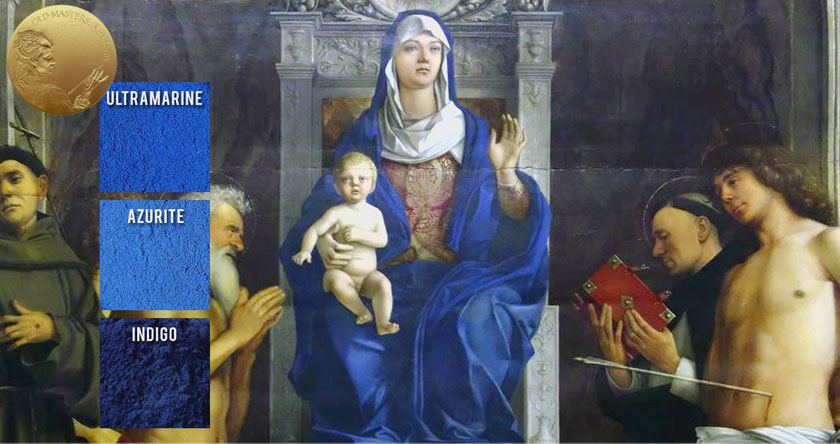 The lavender-coloured sleeve of The Man with a Quilted Sleeve is remarkably beautiful in its visual effects. The cross-section shows several paint layers interspersed that help achieve various hues of purple. The first layer is pale pink consisting of red (red lake) and white, and this is followed by layers of blue and purple mixes, composed of various amounts of ultramarine, red lake, and white. The red lake most likely faded over time, making these layers less purple in colour.

Bacchus and Ariadne, one of Titian’s masterpieces, is packed with precious ultramarine of the highest level, as would be expected for such a commissioner as the duke of Ferrara.

We will talk about the brilliant blue sky later. Now let’s look at the blue skirt of the bacchante with the cymbals. Titian’s original idea was to paint her wearing a pink skirt, but he changed his mind to improve the harmony of the deep blue with the rich-orange drapery. Blue and orange are complimentary colours. The cross-section sample was taken from the blue drapery near the leg, so that’s why we can see the flesh paint of her leg in the lower layers. Next follows two deep pink layers, based on red lake with a little lead white, followed by several applications of ultramarine mixed with various amounts of lead white.

Later, this pink colour, which was the result of the optical mixing of pink and blue layers, was overlaid with multiple blue paint coats. It is known that Titian sometimes used pink underpainting for blue draperies to achieve an optical mixing effect; however, here, blue layers completely cover the underpainting, which indicates that the artist wanted to change the colour’s appearance.

The nymph behind the bacchante is wrapped in a pale blue drapery made from ultramarine, red lake, and white.

The Virgin in The Aldobrandini Madonna is wearing blue, which is quite unusual for Venetian art. We already mentioned that the blue draperies was most likely blanched to some degree, making the folds loosing contrast and, therefore, appear flatter than it was initially. 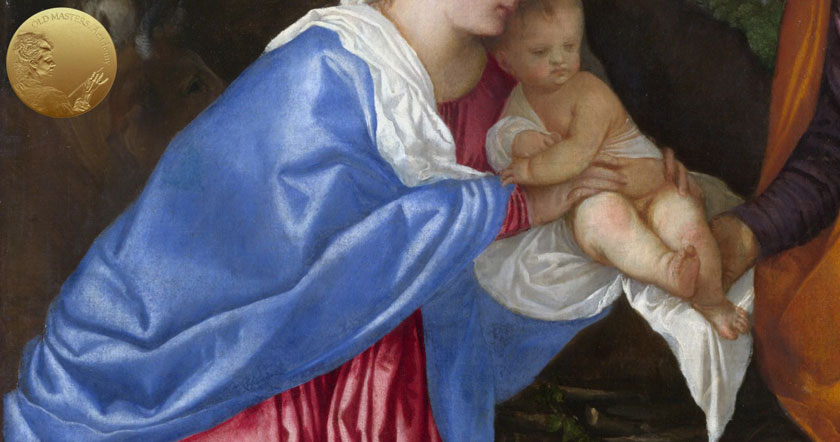 The analysis shows the relatively simple structure of the layers. There is the brown underpainting, then a single pale blue layer was applied on top.

Another sample taken from a shadow reveals that black and dark reddish brown pigments were added to the layer structure. The final layers of the shadows consist of pure, high quality ultramarine. 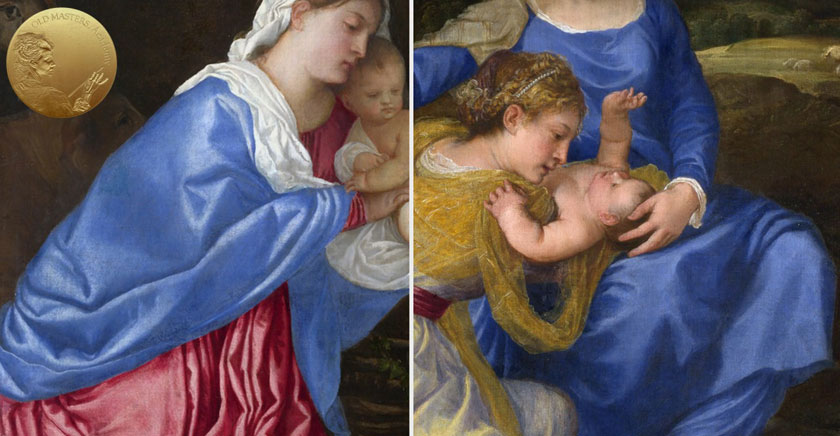